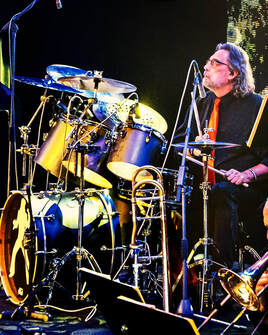 Bob Saydlowski was born in Pittsfield MA and formed his first band at age 13.  At age 19, he was a member of the premier rock band in Western Mass., The Zarvis-Allen Band. At 22, he toured and recorded with the late jazz/rock guitarist Joe Beck, and later backed Christopher Cross and Peter Tork. Throughout the 1980s, he was the drummer for various house bands at the renowned Eastover Resort, doing as many as 250 gigs a year. Bob was the original "Product Close-Up" columnist for Modern Drummer Magazine with over 100 published articles, and also wrote for other music magazines. From 1989-1995, he was Artist Relations & Marketing Manager for Sonor Drums. His playing experience covers the spectrum of rock, pop, jazz, funk, big band, blues, country, musical theater and more. Bob has logged 3,000+ shows at prestigious venues such as The Kennedy Center, Library of Congress, Strathmore Music Center, National Museum of Women In The Arts, National Building Museum, Beacon Theater, Trump Winery, The Homestead, The Greenbrier, many DC five-star hotels, as well as numerous recording sessions. Currently, he is performing  with artists in the Mid-Atlantic area.
​Bob is based in Richmond VA, is available for gigs, tours and sessions anywhere in the world.